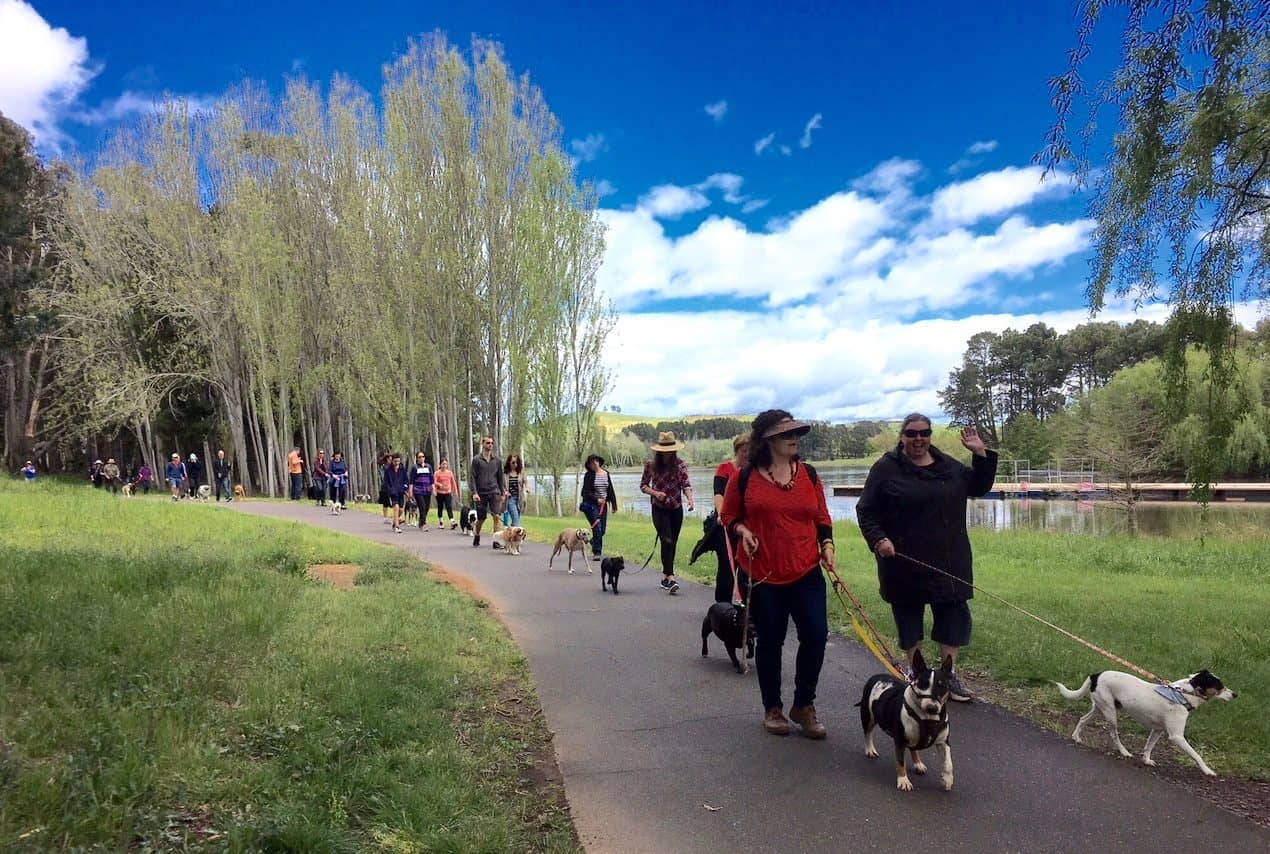 Yarralumla is our very favourite Canberra suburb (no, we don't live here!). This extremely pretty walk showcases the best Yarralumla has to offer, meandering through parts of Westbourne Woods, past Government House, along the shore of Lake Burley Griffin, and past the fully fenced Yarralumla Dog Park. The mostly shady route makes it a great summer walk; it's also stunning in autumn. A short detour provides a lake swim. There are good off leash opportunities but there is a long on leash section along a path shared with cyclists. The walk starts and ends at the Yarralumla shops which has several dog friendly café options.
Start/Finish - Yarralumla shops, Bentham Street
Time/Distance - Allow 90 minutes/approx 5 km
Off lead rating - ♥♥
Parking - Bentham Street and adjacent streets
Dog friendly café - Several at Yarralumla shops
Public toilets - Yarralumla shops
Bins - Yarralumla shops; dog park entrance on Banks Street; and Forestry Oval
Distractions - Kangaroos in golf club grounds
Playgrounds - None
Photo gallery - See photos taken on the Yarralumla walk.

Note - All our dog walks assume you are a responsible dog owner with an obedient and well-socialised dog. See our Important Stuff page before starting any of our walks.

Use the navigation tools to zoom in or out for different views of the route or click on the 'view larger map' icon on the top right hand corner of the map to view in google maps.

1. On Bentham Street, standing with the shops behind you, turn right and follow the footpath on the right hand side of Bentham Street. Cross the next two streets (Hutchins then Banks Street).
2. After crossing Banks Street follow the dirt track veering to the right and uphill through the attractive stand of cedars.
This track takes you away from the edge of Bentham Street, however you are essentially continuing to follow Bentham Street to the entrance of the Royal Canberra Golf Club. Alternatively, rather than following the dirt track you can continue following Bentham Street close to the curb.
3. Head towards the buildings (used by CSIRO) straight ahead, and then walk to the left of the buildings. Continue along the wide grass verge under the pine trees keeping the buildings to your right and Bentham Street to your left.
On your left through a fence is the old Canberra Brickworks, one of the most intact old brickworks in Australia. It produced bricks for Canberra buildings throughout last century. The area was open for many years and used as markets on weekends, but is now closed to the public due to safety concerns. After much negotiation with NIMBY Yarralumla residents, the ACT Government has now announced the site will be developed into residential, commercial and public spaces by one of Canberra's biggest developers.
4. Turn left where Bentham Street terminates at the entrance to the Royal Canberra Golf Club and follow the dirt track between the houses and the golf club fenceline.
Off leash opportunity starts on the dirt track.
The rest of the walk essentially follows the outside perimeter of the golf club.
5. As the dirt track starts to fade, look for another narrow dirt track crossing to the right and left. You should reach it shortly after passing the last house on your left. Turn right on this track which will take you back towards the golf club fenceline.
6. Turn left at the fenceline and continue on this dirt track for some minutes.
This narrow single-file path through dense canopy forms a pretty lime green tunnel.

7. The track emerges at Dunrossil Drive, the bitumen driveway to Government House. Turn right here and follow the dirt track between the driveway to Government House and the golf club fenceline.
The walk along this track to Government House used to be one of the most beautiful in Canberra. The drive was lined with mature dutch elms and pines thought to have been planted in the 1920s. However most of the pines and many elms which were in poor health were recently removed. New plantings will take many years to recapture the beauty of the original avenue. It is still a pleasant walk but the track has been dug up in places and can be muddy after wet weather.
Half way along the track look out for the long vista through the fence on your right to the Royal Canberra Golf Club's main building.
There is little traffic on the driveway, but take care that your dog doesn't wander onto the road. Also be aware that many kangaroos call the golf club grounds home. While surrounded by a high fence, this part of the fenceline is penetrable in some places by slim, kangaroo-obsessed whippets. Other like-minded slim dogs may also be tempted if kangaroos are in sight. If you have this type of dog, either keep them on a leash or under close supervision. It is highly embarrassing to have the entire golf club staff on quad bikes trying to catch your dog, even if they say they don't mind.
At the end of the driveway, peek through the gates at Government House, surrounded by beautiful gardens and 54 hectares of parkland. The core part of the building began life as a double-gabled Victorian-era house erected in 1891 by grazier Frederick Campbell in what was then a working sheep station. It was purchased by the Commonwealth Government in 1913 and extended to befit residence by the Governor-General, as well as the Queen and her family when visiting Australia. There is an annual public open day when you can wander through parts of the garden and take a tour inside.
8. Just before the front gates of Government House, a bitumen cycle path crosses Dunrossil Drive. Turn right and follow the bitumen path that continues around the perimeter of the golf course (for 2 km) until it reaches a street (Banks Street).
Off leash opportunity ends before the cycle path.
There is little space on each side of the path for most of this section, so be thoughtful of other path users, especially cyclists, by walking on the left and keeping your dog close to your side.
The bitumen path meanders between Lake Burley Griffin and the perimeter of the golf club all the way to Banks Street.
The route crosses a pretty wooden bridge, provides fine views across the lake to the Canberra Arboretum and Black Mountain, and passes under mature native and exotic trees. Some trees still have metal labels attached to the trunks noting the botanical name which have now grown way above eye level. These trees, and others you have seen within the golf club and surrounding it, are part of Westbourne Woods. The woods were established as an experimental planting area from 1913 to 1920 to test a variety of tree species for wider use in Canberra.
Shortly before reaching Banks Street, the bitumen path passes the Yarralumla Nursery on the left. There is a commercial nursery open to the public here.
Adjacent to the nursery is a dog friendly café, the Oaks Brasserie, with pleasant outdoor tables under trees.
There is a 'water station' along this section of path, in case you or your dog are parched.
Shortly after passing the nursery and on your right is the Yarralumla Dog Park. It can be accessed by a gate not far off the bitumen path, as well as from a gate on Banks Street. You can pass through the dog park through this back gate to reach Banks Street rather than continue on the bitumen path.
There are several benches in the dog park if you'd like to pause here for a while and let your dog socialise off leash. The back gate enters the 'large' dog section but there is also a separate section for small or timid dogs and puppies. Both sections have water available and benches.
There is a bin outside the gate on Banks Street.

9. Turn right at Banks Street and walk uphill on the right hand side of the road along a wide grass verge with the fenceline of the golf club on your right.
If your dog would like a swim, instead of turning right, follow the bitumen path across Banks Street. Within a minute you'll see a small beach on the lake shore on the left where dogs are allowed to swim off leash. To rejoin the walk, retrace your steps crossing to the right hand side of Banks Street.
Within a few minutes you'll pass a large house behind a high fence on your right. This is Westridge House which was built in 1928 as a residence for the founding prinicipal of the Australian Forestry School, Charles Lane-Poole and his wife, Ruth. They engaged architect Harold Desbrowe-Annear to design the house in the Arts and Crafts style. Ruth Lane-Poole, an interior designer, was commissioned to furnish Government House in 1927. Westridge House was the head forester's residence until 1961 when it was used for administrative offices. It became a residence again briefly for CSIRO's CEO, before being sold to a private owner in 2010 and considerably extended.
Immediately adjacent to Westridge House is the old Australian Forestry School built in 1927. In stark contrast to Westridge House, it's built in the the inter-war stripped classical style.
10. Follow the small, semi-circular road in front of the old Forestry School to pass around the left hand, far side of the building.
11. After a very short distance, turn left to leave the road and walk under the pine trees to reach the large oval (Forestry Oval).
Off leash opportunity on the oval.
Off leash Forestry Oval is set well back from roads and is largely unused. It provides a very attractive open space perfect for ball throwing and other doggie games when sports aren't in progress.
There is usually a bin next to the amenities block.
12. Walk across the oval to the opposite side, up the bank, and cross the small access road.
13. Veer left through the cedars heading for the four-way intersection (Banks and Bentham Streets) within sight just ahead.
14. Turn left at Bentham Street to return to the Yarralumla shops.

If you'd prefer to join one of our regular guided group walks, find out more at our guided walks page.