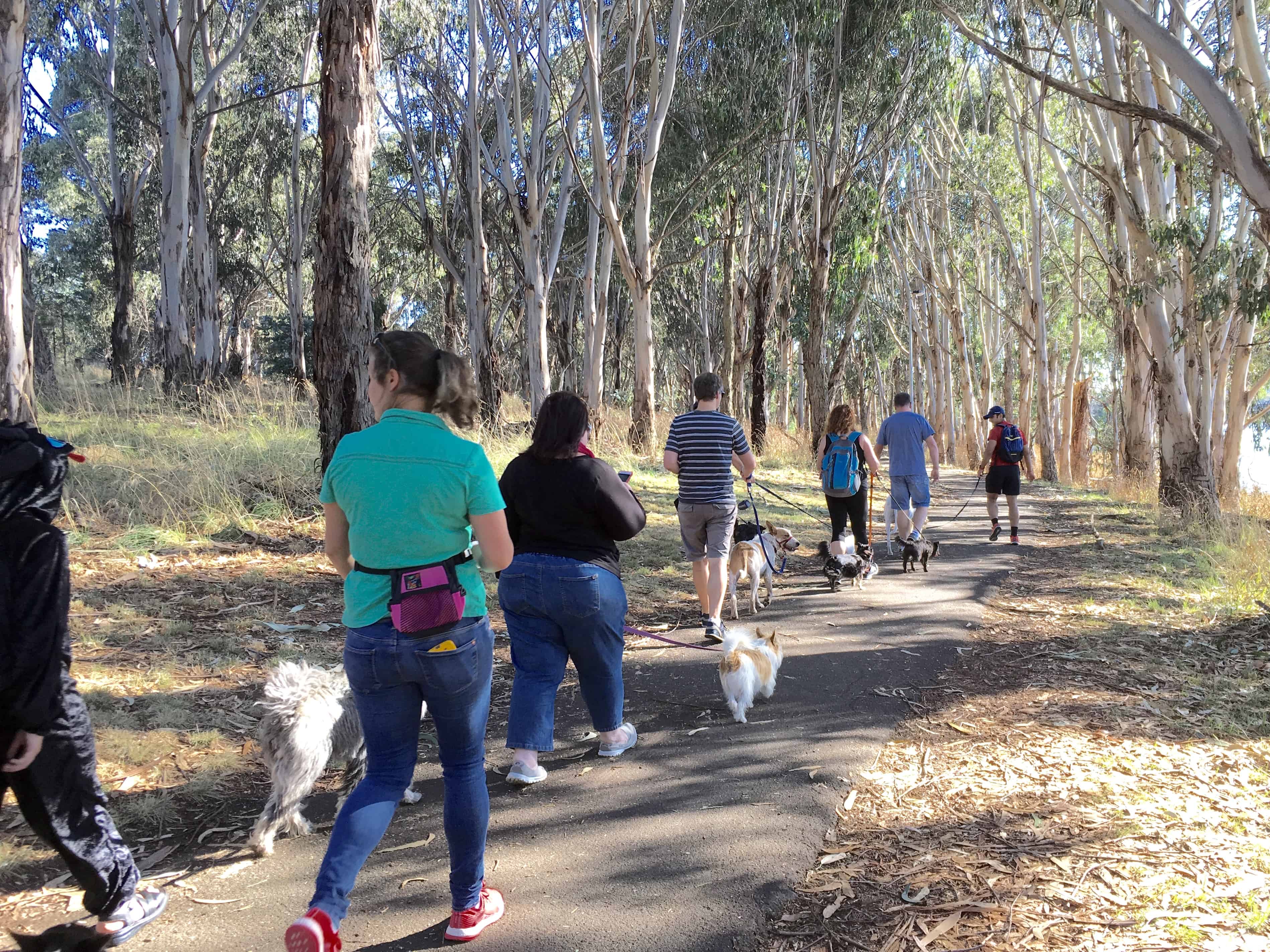 If any walk exemplifies family friendly, this is it. A very pretty, fully paved, pram friendly, short and generally flat walk, the route loops around the edge of a small peninsula jutting into Lake Ginninderra. The peninsula is entirely covered by a lovely park - Diddams Close Park - featuring mature eucalypts and exotic trees around the lake edge and grassland in the centre. Most of the peninsula is a dog off leash area, providing ample opportunities for your dog to explore interesting smells in the eucalyptus understorey and amongst the water reeds. The fully fenced Belconnen Dog Park is located at the beginning of the walk and there is an off leash dog swimming beach at the other end of Diddams Close. No cafés here unfortunately but ample picnic tables and barbecue facilities, plus playgrounds for the kids. Or you could drive/walk to nearby dog friendly Café Birrigai Cafe, off Joy Cummings Place, further along on Lake Ginninderra.
Start/Finish - Eastern end of Diddams Close, Belconnen
Time/Distance - Allow 45 minutes/approx 2.5 km
Off lead rating - ♥♥
Parking - Car park at east end of Diddams Close next to the Belconnen Dog Park
Dog friendly café - No permanent café but mobile coffee vans most weekends, or try nearby Café Birrigai
Public toilets - At each end of Diddams Close
Bins - At each end of Diddams Close
Distractions - Occasional kangaroos in the fenced-off grassland
Playgrounds - At each end of Diddams Close
Photo gallery - See photos taken on the Lake Ginninderra pram friendly walk.

Note - All our dog walks assume you are a responsible dog owner with an obedient and well-socialised dog. Pram walkers will need to venture at leash 10 metres away from paved paths to take advantage of off leash opportunities. The dog off leash beach must be accessed on leash through the picnic and playground area immediately adjacent. See our Important Stuff page before starting any of our walks.

Use the navigation tools to zoom in or out for different views of the route or click on the 'view larger map' icon on the top right hand corner of the map to view in google maps.

1. Start from the car park at the eastern end of Diddams Close (to reach the car park, enter Diddams Close from Ginninderra Drive and turn left at the t-junction). Walk towards the lake shore - in sight - to reach a bitumen path.
Off leash opportunity at the Belconnen Dog Park
The dog park, located about 50 metres from the car park, offers spacious, fully enclosed areas for large and small dogs. You may wish to take advantage of the dog park off leash space at the beginning or the end of your walk. See our blog on Canberra dog parks for more detail.
2.Turn right and follow the bitumen path with the lake on your left.
The area on either side of this bitumen path, which you'll follow for the next 20 minutes or so, is designated off leash. However, given the ACT regulations requiring off leash dogs to stay at least 10 metres from paved paths, you'll need to keep dogs on leash if you're walking on the path, and let them off leash at various points when you venture off the path to explore.
Note that the area nearby the car park includes a children's playground, several powered barbecue sites and a beach reserved for humans just behind the playground and opposite the dog park. Dogs are prohibited on these areas.
Dogs are allowed around the picnic tables on leash.
There is a public toilet block and numerous rubbish bins here, as well as a 'water station' next to the path at the beginning of the walk.
3.After a few minutes the path leaves the open park and passes through a large stand of tall eucalypts with a grassy understorey.
This section feels as if you're walking through a slice of Australian bush, right in the middle of the city. The variety of bird calls nearly drowns out the background hum of traffic drifting across from the other built-up side of the lake.
4. Not far along, a gravel path branches off to a 'bird watching' jetty where local swans keep an eye out for bread throwing humans.
Satisfy your dog's, and your own, curiosity by walking the length of the jetty to have a look.
At this point there's a map next to the path illustrating the walking trails around the lake.
5. Return to the bitumen path when you're ready. There's another jetty a little further along, also accessed by a gravel path.
There are several wooden benches along the way between the bitumen path and the lake shore which are inviting spots to pause, enjoy the views, and contemplate nature.
There are also several spots further along the path past the jetties where there is easy access to get closer to the lake for dogs to have a sniff and explore.
Even if you are not hampered by a pram, we recommend you don't bother venturing off the bitumen track onto the dirt tracks leading uphill to the right. We've check it out: the paths lead up to a grassy knoll adjacent to the central fenced grassland area in the middle of the peninsula. The views are not particularly interesting and there are often kangaroos and cattle in this fenced area which may attract chase inclined dogs.
6. About 20 minutes from the walk starting point, you'll reach another children's playground, picnic/barbecue area and swimming beach.
Off leash opportunity at the swimming beach.
Dogs must be on leash to access the swimming beach, walking from the paved path through the picnic area, but once on the beach are free to have an off leash paddle and play. For more dog swimming spots see our blog.
There is another toilet block and numerous bins between the path and a car park on the right.

7. Continue a short distance past the beach to where the bitumen path crosses a road (the western end of Diddams Close). Turn right here and walk on Diddams Close to return to your starting point at the other end of Diddams Close.
Despite requiring a walk along a road, we recommend this route back to the starting point because the road is quiet and the route is pretty. It follows the edge of the fenced-off grassland area for part of the way with views across to the distant Brindabella Mountains on the right and stunning foliage colour in autumn. There's also the possibility of saying hello to fat hereford cattle across the fence and watching kangaroos grazing amongst them.
If you prefer not to walk back on Diddams Close, instead continue on the bitumen path a few more minutes until it forks at Ginninderra Drive. Take the right fork (well signposted 'Diddams Close 0.3 km') and continue on the path next to this noisy main road for about 10 minutes until it connects with the other end of Diddams Close and your starting point.

If you'd prefer to join one of our regular guided group walks, find out more at our guided walks page.